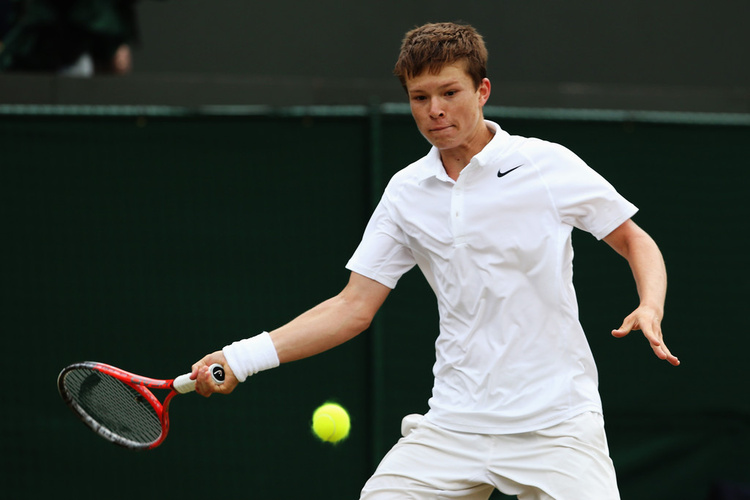 Spoiler:
Status: ATP 1168. Is competing at the Delray Beach pre-qualifying event this week. The ATP Delray Beach tournament will be held next year from Feb. l4-23.

First tennis memory: “Playing in the rain with my dad (Andrei). When it was raining we kept playing with soft balls. Really good memory.”

First famous tennis player you met or encountered: “Yevgeny Kafelnikov at Sony Open in Miami. But I was really little. My parents were telling me the story. (What’s the story?) I didn’t want to take a picture with Kafelnikov. I don’t know why. I was five years old. I started crying. Never took a picture [smiles].”

Last book read: “I haven’t read a book in a while…just kidding. Probably Life of Pi.”

Fiercest competitors encountered: “I practiced with Federer a couple of times. But I don’t know.”

Did anything surprise you about practicing with Roger Federer (at US Open in 2012): “Nothing really. I mean, I was pretty surprised that I could hang in with Federer, return his slice, and I was getting everything back with the same speed on my shots.”

Who do you love playing tennis: “I love tennis because it’s a fun sport. There’s a lot of other things that you can do on the court and it’s pretty fun.”

Funny tennis memory: “Once there was a huge bug on the court. I don’t know what kind of bug it was.”

Strangest match: “Junior Davis Cup. I was up 5-1 in the third set in the semi and I lost. I had maybe six match points. (Against who?) Australian kid.”

Best you ever felt on court: “Maybe playing this year at Wimbledon, second round. (Against who?) Lucas Gomez of Mexico.”

By Matt Cronin, special to USTA.com

MELBOURNE, Australia -- Stefan Kozlov’s doctor tells him that he could end up being a fairly tall player at the age of 18. He’s not quite at that height yet, but the 15-year-old doesn't need to be because he is already one of the best all-around players in the international junior ranks.

“I’m 5-foot-10½ now, and he said I will grow two or three inches more, so maybe I'll get to 6-foot-1. That’s big enough,” said the Macedonia-born Kozlov, who moved to the United States when he was 1 years old.

Kozlov is the youngest player left in the Australian Open boys' quarterfinals, and while his game still needs work, it is still very impressive, given his age.

“He has great court sense, an excellent backhand, a good tennis IQ," McEnroe said. "He volleys well, and it’s a matter of getting his forehand bigger and becoming fitter.”

Kozlov, who is based at the USTA National Training Center Headquarters in Boca Raton, Fla., is coached by USTA National Coach Nicolas Todero and also works with his father, Andrei. He played a ton of matches in 2013 and went hard in every one of the them.

He reached the quarterfinals of junior Wimbledon, where he ended up cramping in a three-set loss to British Davis Cupper Kyle Edmund. The next week, he received a wild card into the ATP event in Newport, where he nearly knocked off touring pro Michal Przysiezny.

“I thought I had a really, really good year, and I thought I could have won a lot of the matches I lost if I didn't get into certain positions,” said Kozlov of his 2013 campaign. “I did a good amount of fitness with the USTA and with my dad privately. I know I needed to improve a lot in fitness, so I did a good amount, and I am still improving.”

There are elements of his game that Kozlov is pleased with, but other parts he knows he can improve. One of those is how to quell his jitters, which he thinks may have contributed to his cramping last season. He has started to work with Dr. Larry Lauer, the mental skills specialist for USTA Player Development.

“I had a lot of nerves,” Kozlov said. “The doctor tells me to try to think about something else, think about a match for 15 minutes before it, and then forget about it. I used to get ahead of myself, up a set and break, and think what I would do if I won. Then I could lose focus.”

Kozlov credits Todero with helping refine his game and teaching him to see the court better. Todero travels with Kozlov and another U.S. junior, Michael Mmoh, who is Kozlov’s doubles partner. Both were born in 1998, as was Tiafoe. It is a talented trio.

“Stefan’s fitness is key, and it will be big for him the next couple years because he’s not as physical as Mo or Tiafoe are yet,“ McEnroe said. “For us, it’s good if they push each other the next three to 10 years.”

At this Australian Open, Kozlov beat Aussie Blake Mott in a long three-setter, won another three-set match against Denmark's Simon Soendergaard and then bested Russian Boris Pokotilov, 6-1, 6-2, on Wednesday.

“The first two rounds [were] not so good, but today I played pretty well,” said Kozlov.

On Thursday, the second-seeded Kozlov will meet 10th seed Andrey Rublev of Russia for a spot in the semis.

After the tournament, Kozlov will head back to Florida and try to qualify for the ATP tournament in Delray Beach, play some Futures and Challengers and also more junior events.